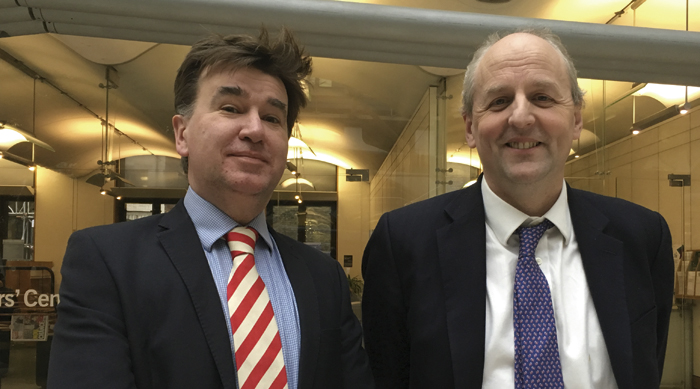 The Water Retail Company – no-one could argue that this is not a reasonable name for a water retail company. The founders of this new entrant to the retail market are both eminent and outspoken figures in the utilities industry – Jacob Tompkins, former managing director of Waterwise, and Lord Rupert Redesdale, Liberal Democrat peer and chief executive of the Energy Managers Association.

As the opening of the retail market draws ever closer, the dynamic pair decided to put the concerns they had about the lack of focus on water efficiency in the market to good use, capitalising on their collective experience to launch their own technology-focused retailer, which will target large water users. And the “boring” name, Tompkins insists, is entirely deliberate.

Neither Tompkins nor Redesdale can remember the specifics of their first encounter, other than that it was about 15 years ago and “probably something to do with one of the Water Bills”. But a shared interest in efficiency and environmental issues meant they immediately clicked.

When they met, neither of them took competition seriously, brushing it off as “a bit of a side-issue”, but all that has changed. Now they want to be active players in the market; and even go one step further to suggest they could lead other companies by example.

“If we can help influence the rest of the market, that’s a good way to drive forward water efficiency,” says Tompkins. Redesdale replies with a smile, but only half joking: “No we don’t want them to do that…”

Their initial ambitions are, however, much more conservative. The business currently employs just five staff, and will limit itself to serve no more than 20 business customers extraordinary well in the first year. It will then recruit just five to ten more staff members in that time in an effort to serve only 100 clients to the highest customer service and unbeatable market knowledge and price.

Tompkins is a self-professed tech nerd and, when he officially leaves Waterwise, he will take up the post of chief technology officer at the company. Redesdale will remain chairman and will act as chief executive until a replacement is recruited.